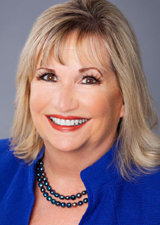 Lisa Sommer Devlin has practiced law since 1984, and has concentrated in hospitality law for over 25 years. She negotiates contracts, provides legal training for sales staff and handles convention and meeting related litigation nationwide for major hotel companies, and many independent hotels.

In 2002, Lisa was named one of the 25 most influential people in the meeting industry by Meeting News magazine. In 2006, the magazine gave her the honor her again, stating: “More than anyone else, she is the legal voice for the industry.” She has served as a member of the Legal Advisory Counsel and on the Contracts panel for the APEX Initiative sponsored by the Convention Industry Council, and was President of the Academy of Hospitality Industry Attorneys 2012-2014. In 2015, Meetings and Conventions magazine included her in its “M&C’s Top 25 Women in the Meeting Industry.”

She has published numerous articles on hospitality related topics, including being the primary drafter of the American Hotel & Lodging Association’s meeting planner brochure, “Meeting in the Middle.”

The State Bar of Arizona has asked her to serve as faculty for many years at a number of its Continuing Legal Education seminars, including its Trial College and Professionalism events.

She is married to Matthew Devlin and has four children and one granddaughter.